Blade Colours of the River Cam 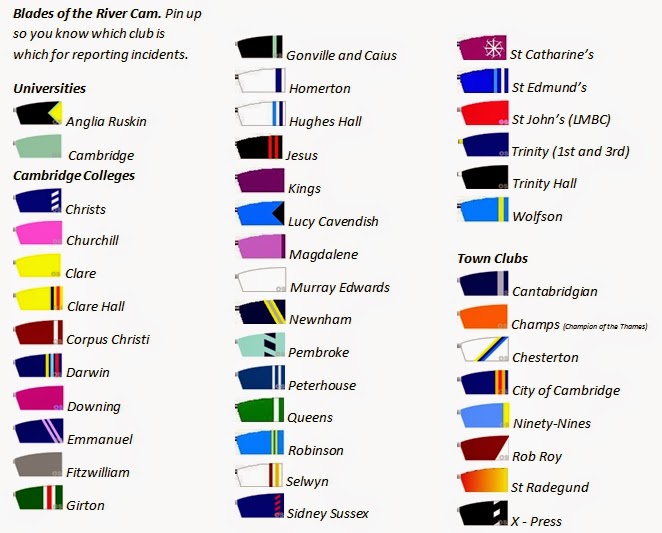 How are the Cam Con enforcing unregistered boats, particularly unlicenced rowing boats?
Rowing boats are particularly difficult to enforce because unless you catch them whilst they are out, they are stored in private boathouses so license stickers cannot be easily checked.
Currently, there are 25 unregistered boats, 9 of which are going to court next week. However, taking people to court is the worst outcome, and the Cam Con would rather sort things out before they get to this stage. Currently trying to liase with the Council to get the fees of those who are eligible for Housing Benefit paid directly by their benefits
Can the Cam Con make sure that boats are insured?
One of the conditions of the river licence is that the boat is insured, so if a boat is uninsured it can’t register and so it will get taken to court, so it can be enforced indirectly
If a rowing boat causes damage, can we claim from them?
If you get the time of the incident, colour of the oars and the code written on the hull, contact either JR or Amy T, and we will be able to work out which club to contact.
Where should we cross over at the Cross Over Point?
Best to stay on the side you are on until you can see it is clear to cross over. University crews work to the rule that boats travelling upstream have priority so they may expect powered boats to observe this

Can we install steps into the bank to allow safer access to our boats?
No, there are strict rules regarding permanent structures on common land, the installation of which would result in higher business taxes which would in turn mean raising our fees. In order to carry out the works recently to improve the path surfaces, permission was required from the Secretary of State.
However, it may be possible to install things under a certain amendment to these rules, as long as they are for general leisure use, and not specifically for individual boats. CO’R and AW to investigate further. This will come to the review of river assets which will take place next year
There are parts of the river bank both on the bank and under the water which need repair is there a schedule for this?
To repair all of the riverbanks would be too expensive so repairs will be carried out on an emergency basis. If there are any underwater obstructions you are aware of, please contact the Cam Con who will try to remove them.
Can you update us on the status of the Riverside moorings?
Have not yet started the task of working out what access needs to be provided and the Health and Safety liabilities the Council have for the Riverside moorings. The railings themselves are owned by the County Council. This piece of work is unlikely to be complete before next summer.
But existing boaters will definitely be allowed to stay.
Some of those paying Council Tax on the Railings have been advised that they can get a discount, but that assumes they are paying for something in the first place.
Need to look into the legalities of this, and work out what to charge boaters for the mooring.
Why are the Council not enforcing their mooring permit conditions?
Allowing flexibility for those who have complex situations
Few resources to carry our enforcement. New enforcement officers are being recruited to help with this. Accept that this is a failing, but that we will see a change in the next 6 months
Are there any ongoing investigations into boaters not complying with the mooring conditions?
4 or 5 who are paying Council tax elsewhere
2 are believed to be sublet
3 are not believed to be living aboard
Are the Council going to increase capacity for those with valid mooring permits? Unlicensed boats and lengths of bank inaccessible.
The stretch of bank between the railway bridge and Morley’s Holt will be cleared for vegetation
The Cam Con will carry out dredging works to make it deeper so people can moor.
Illegally moored boats will be cleared, once enforcement team is expanded
Would the Council consider creating permanent places for boats?
In the forthcoming review of the river and the moorings policy, this will be considered
Shuffling up to make room for all the boats is not an adequate answer to the lack of capacity, we signed the mooring document saying that we wouldn’t act on behalf of the Council, and move other people’s boats for them, as it’s illegal.
The mooring contract is not fit for purpose, but we still need to work to the document we signed until it is improved.
How long will unregistered, illegally moored boats be allowed to remain on the common?
Need to allow some flexibility but there must be a balance between the needs of individuals and the safety of the community. Currently on the wrong side of that balance.
Can we have an additional elsan disposal point at Stourbridge?
This will be considered in the forthcoming review.
How is Council housing managed, and can the same principles be applied to boating?
Mooring is not considered in the same way as housing, although there are similar issues. Need to support vulnerable people but not allow things like subletting. But no plans to move boating over to be run by housing department.
Need to clean the surface of the waterpoint on Stourbridge
C’OR to follow this up.
In terms of maintenance of the bank, some would be happy to do it themselves, whereas others feel the Council should do it.
The Council do see it as their responsibility to maintain access to the river for the public, so some basic level of bank maintenance will continue to be carried out.
The Local Council Act 2003 requires that housing provision be made for various minority sectors of the community  (i.e disabled people, vulnerable adults, the elderly). Would it be possible to add provision for boaters to the Cambridge Plan?
It would only be possible to make provision for actual land based houses, boats are not considered housing provision. CO’R to follow this up as it is not clear what is possible in terms of defining boaters as a type of traveller
In council decision making, we feel that the needs and voices of boaters are often overlooked e.g when planting trees, their blocking of boaters’ access to solar panels is dismissed.
Council will try to bear our needs in mind more in the future, and also work with the Cam Con to achieve more consistency and consideration.
What has happened to the promise to provide safer mooring points to stop boats coming adrift in the floods?
The emergency ground anchors we asked for have been bought and are in the Council stores. We will look into the best way to store them.
Longer term, as part of the forthcoming review, mooring rings will be considered.
Can some of the trees overhanging boats on the Commons be cut back to improve safety?
Yes, C’OR to follow this up

Our community is threatened. Recent proposals from Cambridge City Council would see boaters moved on from Riverside - an area of the city that has been used by boaters for centuries. They would reduce the number of residential boats in Cambridge by a third - or more. They would see fees for those that remain doubled overnight - leaving many struggling to pay.

Please help us by sending an email of support or filling in the consultation document. We've made it really easy to help - just click the button below to go to our campaign website.

Help save our community

SUPPORT OUR CAMPAIGN BY FUNDRAISING US:

If you'd like to support our campaign, go to our GoFundMe page

PRINT OUR DUCK POSTER AND STICK IT TO YOUR WINDOW

To show your support for a fairer world that has community and diversity at its heart please print the duck picture below and put in your house window, car window, on your bicycle on notice boards etc